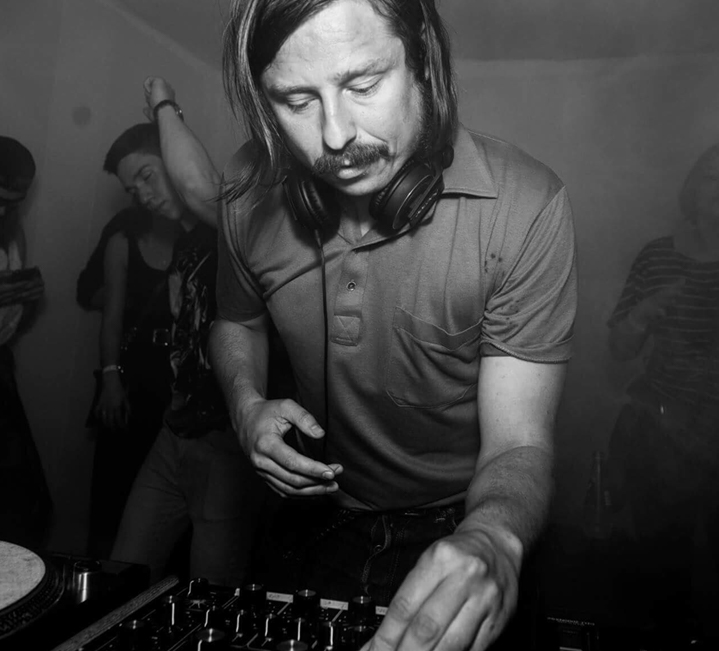 12 hour session behind a DJ booth is something you wouldn’t want to miss this night in Opium club in Vilnius. Especially if it’s driven by maestro, who runs regular Smala club nights in a same dedicated place and releases music on Ivan Smagghe’s and Leon Oakey’s label Les Disques De La Mort.

The solo had already been once last year. Now Manfredas is back to repeat this epic night and – who knows – perhaps turn it into a longest tradition. Watch your back. Pushing electronic music boundaries is not something Manfredas couldn’t do. Having started his carreer in a radio already more than a decade ago, in his words, he didn’t even have to do work he doesn’t feel love for anymore. Even though he appeared in the field quite accidentally in his teenage years, such life had made his name renowned throughout the whole musical world. Manfredas caught the right moment and learnt how to reach out to listeners and stay relevant up till now – only because of understanding the audience and realising it’s not just about short term success.

Now he throws out a mixture of funky psychedelia with the roots of new wave, krautrock, synth-pop and left-field disco onto the motoric dance floors of each club he visits.

No matter how many places Manfredas would visit to play his sets, no matter how terrific Burning Man, 2017 was, where he performed on the main stage on wheels – Mayan Warrior, he still stays true to the home club in Vilnius – Opium. There, as mentioned before, along with a group of other local heroes – 12 Inčų Po Žeme – he runs monthly club nights called Smala. Each time they try to do something different sound and visual-wise, where unity in theme, yet also something peculiar and new would be reflected.

So far, visitors of Smala were lucky to see such artists as Thomas Jackson, Optimo, Red Axes and Sacha Mambo and list is just going on. The recent event due to 5 years of anniversary was even held as a two-day festival, as Manfredas managed to bring the whole Garzen family from Tel Aviv and Israeli desert sounds along with them. Live performances and DJ nights took over the whole weekend and the coldest time of the year in Vilnius got slightly easier to bare.

Some guests of Smala have even told it’s their favourite night in the continent withouth ever asking.

Manfredas has just returned from couple of months spent in Asia, is training well for tonights musical workout and managed to answer me a couple of questions before the night:

Q: What is your current most special record store or the one that significantly influenced you?

A: I’m unpacking records from Decks.de as we speak, but my favourite shop is Bandcamp. I live there. Also, I’m very happy with the first proper record shop in Vilnius – Discotag. Never leave from there empty-handed. Taking an effort to go to the store means meeting a competent seller, who can show me something I don’t know yet and we can have a good conversation. It’s a bit like going to get a haircut. Q: Most memorable happening during your plays while you were recently away to Bali and other parts of East?

A: All gigs were great, but I think Jakarta has a very special vibe. Knowing that it’s mostly a muslim country you might expect things to be quite chill, but its the opposite. Loved it.

Q: What is upcoming in the world of Manfredas?

A: Usual hustle & bustle in Europe. I’ll be DJ-ing a lot, playing some festivals, visiting a lot of places I’ve never been before. I also moved back to Vilnius. I missed my friends, I missed my bar “Marsas”.

Q: What should we wear and expect during your 12hour solo tonight?

A: It’s gonna get physical so think jogging, pilates, solid session of vinyasa and tantric sex amalgameted into one experience. Kimono is always a very comfy idea.

Manfredas had played in as many places as other renowned artist would have done, but Opium is still his favourite place to be. Crowd coming to the nights and bringing their energy along with themselves tend to confirm that feeling even more. Partying hard and carrying the honest digging of music is something that builds and maintains this feeling, so as the recurring visitors of the parties are.