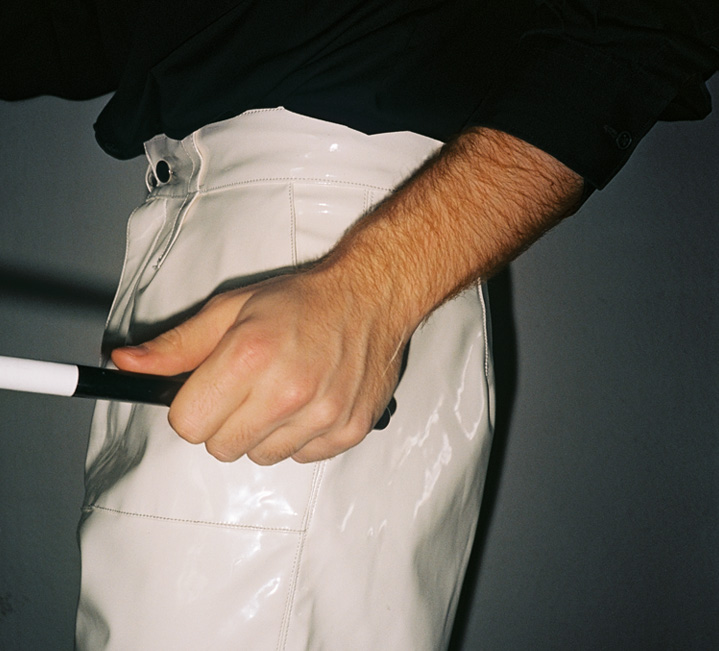 Just before the end of 2018, Kris Baha will be releasing his second EP this year – “In Your Arms”. A record is filled with restless melancholy, chopped beats, sinister frequencies and dramatic twists. This is a release that is truly authentic in a sense that we have classic ’80s – ’90s wave music and EBM sounds mixed together with Kris’ own character and modern electro industrial approach towards the music production.

“In Your Arms” will be released on an independent Italian label She Lost Kontrol. As the label’s name suggests, it is no stranger for dark romanticism, nor for any other artistic expression. According to Resident Advisor, the label claims that it is standing for music without boundaries and bigotry as well as encouraging raw experimental expression.

As full of vitality and creative energy as Kris seems, we asked him several questions about his approach towards the constant creative challenges he faces and the production of his latest release.

You are about to release your new EP, are working on several other projects, and at the same time touring rather frequently, so could you share how your usual day looks like?

I have gotten into a pretty good self-desired pattern where my days start at 7.30-8 and after a little morning ritual of comedic relief (generally satire news) ill get right into my day, be at my home studio or my actual studio I share with Cosmo Vitelli. That will go right up until I go to sleep usually at midnight.

Even though I have a focused pattern I don’t have a weekly regimented schedule per se. I have tasks that I have outlined 2-4 weeks in advance so I generally know what I’m working on ahead of time. As well as my own musical output, I mixdown other artists, too, so that is a big factor with time management.

“From a technical perspective there will be elements, sounds, synths and processes I follow to ensure that while I evolve, I am still recognisable from my earlier recordings.

Listening to your releases from 2016 to the newest one “In Your Arms” it feels as if there was a some kind of direction, a path of evolution or growth you followed. What comes into your mind when you reflect upon the creative and stylistic changes that you went through?

For me there are 2 answers to this question, firstly from a psychological standpoint, I think it’s easy to get lost in your own creative thoughts and ponder the notion of  ‘who am I’ as an artist but if it’s one thing I have tried to maintain is to be as honest as I can with how I was feeling at the time of the recordings. If I am inspired by a certain aesthetic, sound, feelings, whatever, I want that to be as obvious as possible to the listeners to bring them into my creative zone and make them feel apart of it more to understand the landscape of where I am coming from.

Second answer, from a technical perspective there will be elements, sounds, synths and processes I follow to ensure that while I evolve, I am still recognisable from my earlier recordings. For me this is really important because, let’s face it, it’s boring to keep repeating yourself but if you can keep a part of you in a new part of time that you have arrived at, I think that’s cool and for me that is important, to say something new and not to keep repeating what you have already said before. Also when things happen around you, it’s easier to define a direction. Not to get too sentimental here but ‘In Your Arms’ came at the time when I lost a good friend of mine. There’s an impression that the music on the upcoming release leads through the classical genres of Dutch and French minimal wave and EBM music of 80’s and 90’s. Absolute Body Control and In Aeternam Vale are the names that firstly came to my mind. As well as a more contemporary project by //TENSE// and their release “Memory”. Is there any connection between you and these genres as well as the projects that are mentioned?

Sure, it is no secret I am heavily inspired by French minimal wave, German industrial and avant-garde as well as early proto music of the 80’s/90’s in general, although I do not like being bound by musical genres… To be more specific in relation to certain elements of the music rather then the over all ‘genre’ banner, the delicate despair and tragically romantic albeit melancholic melodies and dissonance are qualities I can heavily relate to which, is concurrent in some of these styles of music. I don’t know why but it’s just an aesthetic that I feel strongly attached to. Artists like In Aeternam Vale are musical inspirations to me but the same goes with Hard Corps, Ortrotasce , SPK, Das Ding, Chris & Cosey, early Düsseldorf school and such.

The music on your EP has a strong emotional charge, everything from the the names of the tracks, to the lyrics, melody and rhythm evokes a sense of nostalgia and drama. Especially, the tracks A1 “In Your Arms” and B3 “Jonathan” sound like an ode to the past. What could you tell about the emotional depth that is sensed within the EP? Oh ok, so we are going to get sentimental then (smiles). I guess you can say an ode to the past, a personal loss of a dear friend Yanni/ Jonathan who used to work for my brother Dan and I at our weekly club night Survivor/ Power Station along with one of his older brothers Joey. His loss was felt through the entire community in Melbourne and this record is dedicated to him. It’s my way of dealing with this grieving process from abroad and saying goodbye, as I was not able to be back home to be there with everybody during this period.

When you create music, do you dedicate it to anything or anyone; is there a philosophical reason for your creative output or is it just for the sake of unleashing the creative potential without a clear purpose?

The Umbrella of Art does inspire me, be it music, visual aesthetics, conceptual themes, certain emotions and wanting to explore all of it and see how it translates as sounds. It could also be a recent event or interaction I have had with somebody, anything really. As an artist, I tell stories through music; so having all kinds of inspirations is key for me. Before going to write (usually in writing blocks of 2 weeks where I will write 3-4 songs a day) I have a loose idea of what I want to do beforehand but when I’m writing that can change and generally does a lot.

You can try and steer it but for me if it’s not going the way you intended quickly then you are probably blocking or forcing something and best to just start on something new and move on without killing the vibe or to let go of your initial idea you had and see where else the session takes you. Everybody works different but after writing music for 17 years I’ve learnt what works for me – for me the creation process needs to be fast and fluid, otherwise the vibe dies if you spend 5+ minutes trying to eq a kick drum.

I need to be as honest with myself as I can in that moment and that always gets me fast results and fast results usually means something is clicking naturally – that’s how I think I capture the emotion in my music anyway. It’s like that old cliche, learn everything and then forget it all and if it ends up going somewhere else than you planned, then so be it.

“I need to be as honest with myself as I can in that moment and that always gets me fast results and fast results usually means something is clicking naturally – that’s how I think I capture the emotion in my music anyway. You will be releasing the EP on a relatively fresh label “She Lost Kontrol”. What is your connection to the label and what’s the reason of choosing it for your release?

Well as you said, it’s a fresh label. That is how I felt when I found their “Surviving in Europe” series on Bandcamp. For me it was a label that I felt understood my artistic vernacular. It isn’t strictly dance music but it isn’t strictly experimental either, nor is it all of the “waves” and industrial, it’s a combination of everything for any moment. That’s how I feel about my own music or at least that’s what I try to achieve.

From memory, I think we met because Carmine (1 of the three from the label) saw that I bought their music from band camp. He told me they all lived in Berlin, which I was really glad about, as I wanted to meet them so we did and they asked if I would be interested in doing a remix for Blind Delon. From there they then presented the idea of a split EP with another artist but turned into an extended solo EP.

Not limited by function, nor purpose, Kris Baha’s EP “In Your Arms” will be released 20th December on She Lost Kontrol record label. Pre-order yours here.