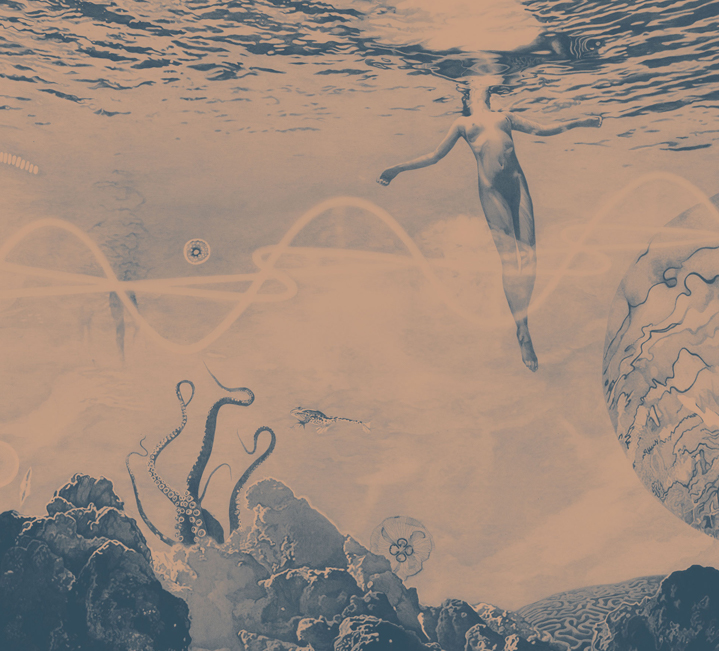 Berlin-based interdisciplinary artist and producer Eva Geist talks about her recently on Macadam Mambo records released album – Desfãn, and how darker and mature the album is compared to her previous musical works.

Even though the release date was 15th March, this highly anticipated piece of work was something to look forward to way much earlier than that. Having previously released three records – Dniheb EP for the same French label, cassette-only album – Äquator System and Blumareciano EP for Fleeting Wax – Eva is back with not less cinematic and marine themed collection of sounds, which proves she’s not a newcomer in the field.

“Desfãn means to have found my real nature and have accepted it. It means to let go of the idea of perfection.”

Desfãn comes as 9-track album, where enchanting underwater notes, ghostly humming, melancholic synthesiser and sometimes more upbeat, sometimes rather soft drum machine sounds collide. The opening track – “Prologo” – gives to the listener rather tense feeling as he is sucked into the beginning of the story quite energetically. Feels as if one has passed through the water’s surface and suddenly got caught by something underwater, which he cannot fight back but just surrender and follow along the waves. Q: You are born Italian, but currently living in Berlin. What inspirations could you mention on the way while working on Desfãn?

A: The music I listened in the past years, made and played by my friends in Berlin, the concerts and party scene I attended, the sleepless nights, to be lovesick, the full moons, the end and the beginning, the feminine, my girlfriends, the love for my mother, the discovery of the soul, reincarnation.

After rather intense opening, “Electronic Tribalism”, the next track in the album, sounds more relieved as if the tension had already passed, the pace underwater slowed down and the travelling got calmer. Looped hollow sounds of synths are the key line of the track that give the idea of going with the flow and starting to observe the surroundings.

Tribal sounds are getting replaced by more upbeat “Incomprensione”, where the synth keys still hold the front position for the most prominent sound of the track, elevating listener to the highest peak of album’s melodies, so far. 3rd minute of the track feels like reaching the culmination with drum machine getting more intense and overtaking the synths. The idea of voice or a sharp inhalation in the background starts to appear.

Q: What Desfãn means to you as the work of art? At the time when you were working on it and now, since the release is already out in public?

A: It means to have found my real nature and have accepted it. It means to let go of the idea of perfection.

“Rubber Heart” proves this quote of imperfection. Abrupt and incomplete, even slightly metallic sounds reflected in the track create the whole melody and are later accompanied by Eva’s vocals. This might be the most experimental and avant-garde part of the whole album and is followed by next and, probably, most important track, which gave the name to the album – Desfãn. Having the underwater journey reflected in previous melodies, this one gives the idea of now being above, as one can clearly hear strong waves of the ocean hitting the rocks. The opening beat line gives the idea of slight danger or uncertainty. Q: Doesn’t “desfãn” mean “cancel” or “undo” translated to English? Why did you choose this name?
A: A person I know gave this name to a medical plant he grows at home. One night I visited him and he gave me a leaf of this plant. That night I recorded the first version of the track which gives the name to the album. I worked on this album for more than 2 years. I changed, deleted and recorded again many elements of it. Desfãn is a word that has a meaning to me (and to you now) only, like Dniheb, the previous EP I released for Macadam Mambo. In 2017 a very important relationship came to an end. The idea to have made mistakes and to have the chance to “undo” them hunted me. Music has been the therapy.

Q: The cover for the album looks lovely. Could you explain something more about this artwork?

A: Maria Torres is a visionary artist I met in Berlin a couple of years ago. When she showed me her work I was completely witched. It is so complex, full of hidden details. When we decided to collaborate on the Dniheb cover we met for a short brainstorming by the river in Kreuzberg. She was eating a choco biscuit. From the very beginning we decided to use an aquatic landscape. When I released the EP Sacha and me already had the plan to follow up with the release of an LP and to involve Maria for that as well. So there’s a previous concept behind the two releases. Maria decided to set Dniheb cover on the surface of a swamp and Desfãn in the depth of the ocean. That could be also a metaphor of our personal and artistic journey.

“The underwater landscape of this cover, it’s changes in light, it’s monstrous creatures and it’s floating beauty, is not an outer space around us, but an inner glimpse of a being, and perhaps somehow of all of us.”

Maria Torres, the person behind the artwork has her own perspective on the cover, and opinions of these two women nicely sum up not only the visuals, but also the whole idea of the entire piece of art, both musical and the visionary side:

“Andrea (Eva Geist) and I are connected in a relationship where art and friendship are completely intertwined. Life as a playground for art, and vice versa.
Water is the perfect metaphor for our collaborations, a fluid ecosystem where we are both at home. The image for Dniheb had a celebratory, colourful essence, portraying a mystical electronic female merging with nature, her gesture inspired by goddess archetypal representations.
Desfan’s style is naturalistic, real. After a year of deep self exploration shared through our friendship, Andrea’s album is full of findings, and the cover could not be other but an image of contemplation and depth.

The underwater landscape of this cover, it’s changes in light, it’s monstrous creatures and it’s floating beauty, is not an outer space around us, but an inner glimpse of a being, and perhaps somehow of all of us.” Q: You released the album on Macadam Mambo records. What’s your connection with the label?

A: Macadam Mambo is my family. Sacha and Guillaume who are taking care of it are my brothers and beloved friends. Macadam Mambo is home. We’ve been growing together I think. The label became amazing, released a lot of unpublished music, promoted new producers and musicians. I admire what Macadam Mambo has being doing a lot, it will always be home for me.

Q: How different do you think it is from “Äquator System”? Did you try to make them differ more rather than keeping both on the same musical path in your opinion?

A: Äquator System is in the stars and the space, Desfãn is in the submarine world. One lighter, one heavier. Desfãn is more mature, it comes from a place where pain and dark matter transform into something transcendental (which is in Alchemy the phase called “Nigredo”). Äquator System was live recorded. Desfãn was a long and complex studio production.

Transcendental sounds keep remained as well in the closing track of the album – “Abreise”. Translated from German it means “departure” and it definitely gives the feeling of floating or elevation, perhaps the exodus, too.
Desfãn is a world of fantasy, deepness of ocean and feelings, as well as a one female’s electronic project – both brilliant and personal.

You can purchase the album on Bandcamp, get Maria’s artwork here and catch Eva touring the upcoming months all over in Europe.