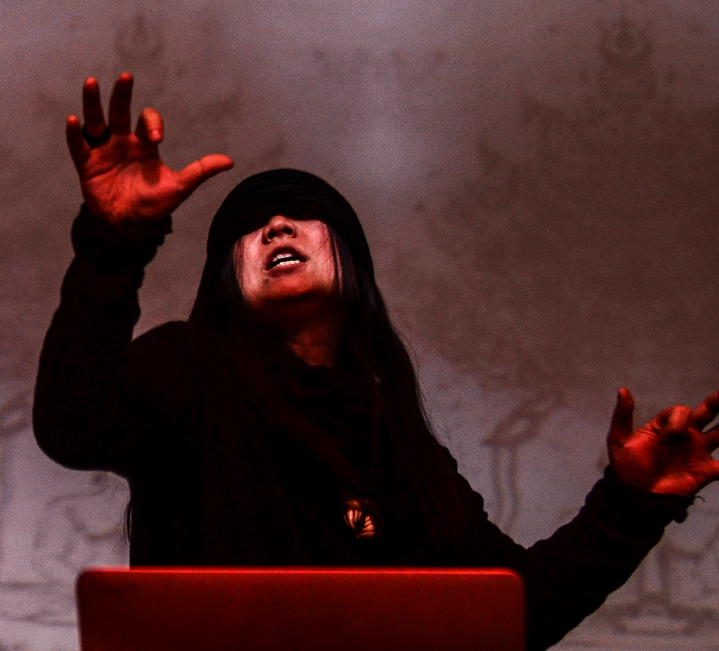 Making its way through the European music scene, Zaliva-D has already given us a second chance to speak with them on Calypso Magazine by having a chat with the man responsible for the musical part of the project – Li Chao.

Presented to us by a Lithuanian crew, Isla, Li Chao and Aisin–Gioro Yuanjin, the duo running the project, has performed in Isla event series where we had the first-hand experience of their stunning audio-visual performance. Wrapping the audience in an alien aura, radiating from their unique personalities, the artists managed to hex the local scene and become one of the most cherished electronic music projects that is carefully followed by the industrial and experimental music community in Lithuania.

We managed to get Li Chao’s retrospective on his creative process, internal and external influences over the project and some personal details from the artist.

Li, before we jump into more details, could you share with us how are you feeling at the moment and how is it going with creating music lately?

After coming back from Europe at the end of November, the heavy air pollution in Beijing kept me coughing for a month and I didn’t know when I would recover. Sounds depressing, right? Recently I have been working on some songs for the next album. It takes a lot of time, so I feel a bit tired physically, yet making new music in the studio always makes me happier than anything else. Hopefully, the new album will be released around 2020. I read in your interview for De School that you have been influenced or at least fascinated by the early German EBM. What do you think of the contemporary electronic music scene in comparison to the early one we had in the 80s/90s?

Yes, I used to like some European industrial music very much, such as early Das Ich, Combichrist and so on. At that time I was crazy about their music and tried to imitate them. I have been learning from this process a lot of techniques until I was able to try and make my own music.

Frankly speaking, no matter in the past or now, my knowledge of European electronic music is very limited. At a time when I was obsessed with music, there was a lack of information, slow Internet access and language barriers but when it got better I no longer had time to listen to music. Therefore, I hope to make more friends, so they could tell me more about music during my future tours in Europe.

In my opinion, part of today’s electronic musicians stick to a certain style and strive for perfection, the other part breaks through the existing frameworks and strive to create a unique sound. I am more of the latter. Because of the latter group of musicians, the boundaries between contemporary electronic music styles are blurring and labels like underground are losing their meaning.

“At a time when I was obsessed with music, there was a lack of information, slow Internet access and language barriers but when it got better I no longer had time to listen to it.

In the same interview you said that dark electronic music faces cultural barriers in your home country. Before having started touring Europe, did you perform much as Zaliva-D in China and East Asia in general? What was your experience there as a performer of electronic music?

It’s not so much about the obstacles as the lack of company. Even today, some of the dark and deep themes are always presented in the Chinese metal scene while the electronic music scene rarely, if ever, has such a sound. This makes me think that in China the era of electronic music has not yet arrived, although it is coming soon. I’m sure more and more people will abandon traditional band expression in favour of personal, more creative electronic sounds.

We’ve been performing in major Chinese cities since late 2012. Most of the other cities have very little market for electronic music. Performing is another way for me to output my works together with face-to-face interpretation, which is good, yet it takes a lot of time and energy to prepare for performances, so we can’t play too much. I’m glad that more people are coming to see us now comparing to the early years, and more of them come for music rather than just for drinking and dancing.

“I got to know some great musicians on tour and we got to understand each other’s music and resonate with each other, that was more fun than anything else. This also made us enjoy the shows in Europe more. Cultural shock goes both ways – for a European to visit Far East is quite an experience; facing different mentality towards everyday life and art definitely has an impact on a person. However, what shook you the most when you started touring around Europe?

In fact, I am a person who is no longer young, no longer sensitive to environmental and cultural differences and hard to be shocked. Perhaps what makes the most difference to us is the beautiful environment, fresh air and peaceful city atmosphere in some countries which we have not experienced since living in Beijing for a long time.

For culture and art, to be honest, because of my numbness I didn’t have any special feeling. But I got to know some great musicians on tour and we got to understand each other’s music and resonate with each other, that was more fun than anything else. This also made us enjoy the shows in Europe more. I need more friends around music, because in my country such friends are as rare as diamonds.

By the way, if I have to mention an experience of being shook, I’ll never forget the traumatic experience of the instant fried rice in a European supermarket.

Did your relationship with art change after all the recent travels, and if it did, how much?

As I mentioned in the last question, because of my numbness, my emotions and goals in music are hard to be influenced by other things. In other words, I never get creative inspiration from real life, so whether it is a foreign tour or anything else, my expression will not change.

From your perspective, did Zaliva-D and its sound change much during the years from 2013 to 2019?

2013 was an important turning point for Zaliva-D. Since then my works have been very different from those before. After that I have been trying to make small changes but most of the time they are a bit out of control and I can’t plan ahead for what it’s going to sound like when it’s finished.

When I finish a segment it may be a surprise or a disappointment. Maybe I spent several months trying to change it but failed, maybe I wanted to stay the same for months but made a different sound. But one thing is certain, through the years of study and practice my mixing ability has become better. Looking back from 2013 to 2015, the songs I mixed were not good enough. I believe that every successful project has to have a mythology, some kind of context that people can relate to. What are your thoughts on the concept of mythology behind artistic projects? Is it important for Zaliva-D?

When I was an extreme metal player, I thought what you said about mythology was very important, even was the soul of music. But now I am making electronic music, I hope the listeners could have their own imagination. There is always an element of idealism in art itself and in people’s understanding of art. It doesn’t matter whether I base my music on some mythologies or not. I don’t care. What’s more, it’s hard for me to really believe in any myth or things like that have been handed down by humans themselves. I don’t believe in everything, so I can overturn and ravage everything rudely in my consciousness, or calmly use my imagination to create something completely different.

“I don’t believe in everything, so I can overturn and ravage everything rudely in my consciousness, or calmly use my imagination to create something completely different.

What are your ambitions for the future – any artistic direction you would like to pursue or maybe you have any intentions to have some kind of influence towards social and political situation in China?

First of all, the past and the future are the same. Making music is like a drug addiction for me. I just can’t stop. Secondly, when we talk about the direction of art, I don’t know much about other countries, but in China, some musicians want to make cross-media art that integrates sound art, visuals, installations, performance and so on to give the audience a comprehensive experience.

Although, forms of expression of Zaliva-D are Music and Visuals, yet we have no intention to expand them like that. I want our Visuals to completely serve music. It is attached to music and gives music extra points when performing, however, the core of Zaliva-D is only music. I don’t need any high-tech, expensive or complicated expressions. I hope my music could impress the listeners whether it’s on our shows, at home or on the road through headphones.

When I was young, there was some music, no matter in what style, that moved me to goose bumps and tears when I listened to it.  Although this is not a logical goal, but such an infectious music is my direction. In terms of society and politics, they are very far away from me and I have no interest in them since I was a student. If there was an almost impossible day for my music to have an impact on them, I would think it’s a very baffling thing.