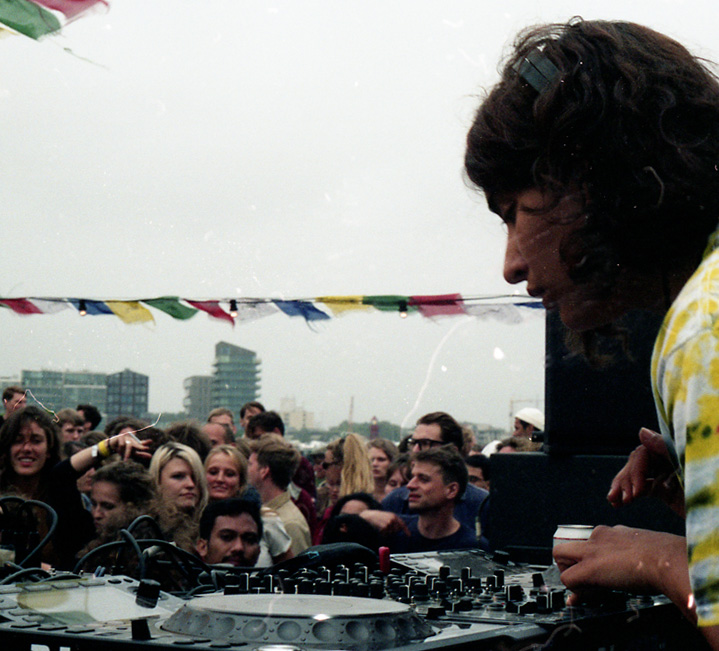 Early on Saturday afternoon, a noticeably colourful crowd make their way leisurely from behind Amsterdam’s central station to NDSM via ferry where the third Strange Sounds From Beyond is taking place. The tone of the festival has always been laid back, with previous editions taking place on Sundays and attracting an older, musically educated crowd, many of those who have work the following day. It is a festival with a party atmosphere, but with an element of restraint. This year, however, the festival chooses to let loose and spread its programme over the entire weekend, including a night line-up at the newly opened club Noordership, conveniently bobbing a mere 500m or so from the festival site.

The inaugural Saturday crowd takes a while to find its footing, but the music is strong from the get go. Local Merel and London-based Randstad open in unhurried fashion on their respective stages with chugging under 100 bpm sets to help people settle in, sip beers and nod heads. Local duo Lulu and Mata Hari follow on the Red Light Radio stage with a series of delightful and mysterious selections, peaking with South African producer Esa’s ‘Blast’ – a track that causes the party spirit to become palpable, as much as the festival’s tight sense of community amongst artists – Esa played here during the first festival as part of Ata Kak’s band. Another Amsterdammer, Job Sifre, who has had an extraordinarily wild year, applies some throttle and has the entire main tent dancing by the end of his set to heavier synth and EBM tunes. It sets the stage for a stunning live performance by Berlin-based band Die Wilde Jagd. For their show there’s not loads of dancing, but there are smiles as the dreamy Krautrock pours out of the tent and up into the afternoon sun. Wandering around, it soon becomes apparent just how clever the programming is at each stage. There’s an obvious sense of flow to proceedings that lacks at many festivals. Acts seem to set each other up or bleed into each other seamlessly – even when live performances follow DJ sets or vice versa. This is most noticeable as Detroit’s legendary Dopplereffekt begin to play, donned in their masks for an all out electro assault to an enthusiastic crowd. As JASSS confidently takes over, she increases the tempo and the electro barrage is sustained, but this time breakbeat tracks and more punishing techno selections are introduced, like Silent Servant and Phase Fatale’s ‘Plastic Motion’.

As JASSS concludes, Saturday’s main course takes place to a tent at fever pitch. Two heavyweights, The Hacker and Alessandro Adriani, move onto the stage. Festival B2Bs with big names often disappoint, but here the set is hugely enjoyable and works incredibly well. The Mannequin Records head honcho, Alessandro, veers towards darker electronics – ‘spreading cold waves’ as his Mannequin t-shirt reads. The Hacker pulls back up for air from beneath those waves with lighter, more playful tunes like Westbam’s edit of DAF – Sato Sato. The tension makes for an extremely danceable affair, and culminates in Dopplereffekt’s ‘Sterilization’ – a nice nod to the Detroit legends who now sit backstage. Over at Red Light Radio rumours grow of yet another Vladimir Ivkovic masterclass. Popping over briefly, it’s instantly apparent that he has the crowd worked into one of his slo-mo trance states. Trying hard not to get sonically hypnotised by Vladimir, we move to check The Rest Is Noise’s stage – a huge set up in the middle of a concrete expanse that is by now not quite as personable as the rest of the festival. The enigmatic Mykki Blanco makes best use of the industrial space (and surrounding bushes), to add a sense of intimacy which it lacks. As the day draws to a close we opt for Lanark Artefax to close out the day. It is not danceable, but it makes for a moving and highly imaginative sonic closing as the light starts to fade. On Sunday, Dollkraut Band’s spacey live act is the most popular choice to kick off the proceedings. Once again, the performance is indicative of just how strong the Dutch scene is right now. A worthy mention in the early afternoon goes to twice upon a time who deliver an exceptionally fun set that dictates a lighthearted and playful atmosphere for the rest of the day on Red Light Radio. They are finishing with Dead Prez’s ‘Bigger Than Hip Hop’ in style as the mixing desk is moved round to make way for Aussie ex-pats Kris Baha and Dreems’ superb psychedelic live act – Die Orangen.

Suddenly everyone is crammed in to watch mad miran – who, like Job Sifre mentioned earlier, is another Amsterdammer who has had a huge year. There is a massive weight of expectation on her, but she well and truly delivers, causing a near riot and unexpected singalong to an actual breakbeat tune in the form of Noisia’s ‘Lekker’  (I challenge you to find a more perfect Dutch festival anthem for the summer). She rounds off with a 140 barrage of awesome breaks and dubbier sounds. Momentum is continued, if not topped, by DJ Marcelle who commands the crowd with her record bag of pure treasure. Wicked jungle, dusty drum n bass, and forgotten about footwork bangers all come at a frantic pace as she expertly works over three turntables. It’s a true delight to behold. Highlights include a footwork track by Leatherface named of C & C that has people literally bouncing on the sand floor as if it were a trampoline.

Identified Patient then steps up to close and is joined by Hugo of Red Light Radio as their slow and sleazy Stallion’s Stud project takes full flight. Hugo stands on the mixing desk and screams into the crowd as the night draws in and the breeze from the water behind blows his hair. The scene is pretty iconic. It seems a fitting, too, because the day here really belongs to Red Light Radio.

Strange Sounds From Beyond is a festival that continues to improve. Its expansion was largely successful, remaining true to its formula of weird and wonderful bookings and a crowd still more than eager to go after whatever curveballs are thrown their way.