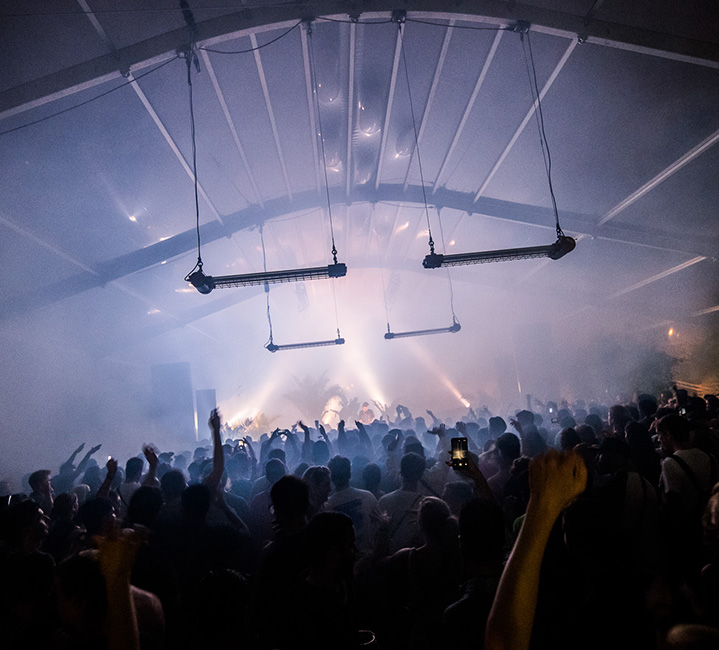 Calypso attended just one day of Dekmantel Festival this year. Nevertheless, the programme – as rich and as varied as ever – provided us with more than enough quality music to discuss from Saturday’s proceedings.

The day got off to a more grey and groggy start than usual. For the past few years, the weather has shone kindly on the three day Dutch festival. 2019’s gloomier backdrop, however, was actually welcomed – it gave the forest a mysterious feel as the air became a little more thick and the atmosphere a little more tense. This worked well for a day of programming that leaned towards darker and hazier sounds.

With that being said, it felt suitable to start off over at Red Light Radio’s stage, that was found nestled just between the Main Stage and the UFO II. There an upgraded Krackfree Soundsystem awaited eager ears. This monstrous piece of tech sounded astonishingly crisp and clear as local Robert Bergman rocked up with his live set that was as impressive as it was sultry. Things kept chugging hard at Red Light as another enormously talented local, Mary Lake, stepped up with a pumping set that wove playful new beat selections with darker electro. Dollkraut, who I’d recently seen playing an incredibly good few hours for Pinkman’s label Showcase at Griessmuehle, made me think that it may be worth checking out the in form DJ over at the Boiler Room. He continued where I’d seen him leave off, playfully opening with an Enya number, before expertly linking a series of dark and hypnotic party tracks. Throughout the set he dropped tasteful favourites by the likes of Identified Patient & Sophie Du Palais and his De Ambassade alias. Soon followed a flawless Boiler Room performance from yet Dutch veteran Interstellar Funk. He raced through an incredible amount of tracks in what can only be described as a true “power hour”. The highlight of the set came in the screaming culmination of Le Syndicat Electronique’s classic “The Men Who Killed the Beat” which caused a heavy dose of classic Dekmantel afternoon Boiler Room euphoria.

After Interstellar Funk’s raucous venture, we decided to rest the legs a little and check out what turned out to be one of the most welcome additions to 2019’s festival: the chillout area. Pulsing slow beats boomed out as ravers took time to lie back on beanbags and drift away to the soothing sounds or sit in tight circles of friends and chat excitedly about where they planned to go that afternoon. Again, the forest seemed to come alive more this year; there was more to explore, more nooks and crannies to wind up in, and, if it was possible, yet more types of music to hear. Much of Calypso’s review last year had focussed on the brilliant new UFO II tent that became a kind of showcase for darker electronics and more left field acts. This year, we decided to pay it visit again and pop to Mannequin Record’s boss Alessandro Adriani and The Hacker’s project Amato & Adriani. Their live set was superb, serving peak time rave power with a thunderous and dark momentum. Looking round the tent, you’d presume it was 5am in some darkened club, rather than 5pm on a summer’s day. Again, the set was indicative of the range of experiences on offer at this festival. The best moment of the day came ten minutes from the end. J-Zbel, from the mysterious French crew Brothers From Different Mothers, donned in masks, dropped their hit Tunnel Vision from the interestingly titled album Dog Farts So Bad That Cat Throws Up. The track – an exquisite blend of psytrance-vocals, pulsing goa basslines, and crashing deconstructed drums – caused an atmosphere as wild as I’d ever witnessed at the event. Their live set was triumphant, and as I walked away smiling, I once again couldn’t help but consider how the festival does the seemingly impossible and go from strength to strength each year. Small, natural additions mean that Dekmantel continues to impress, lead the way, and keep the dancers dancing.