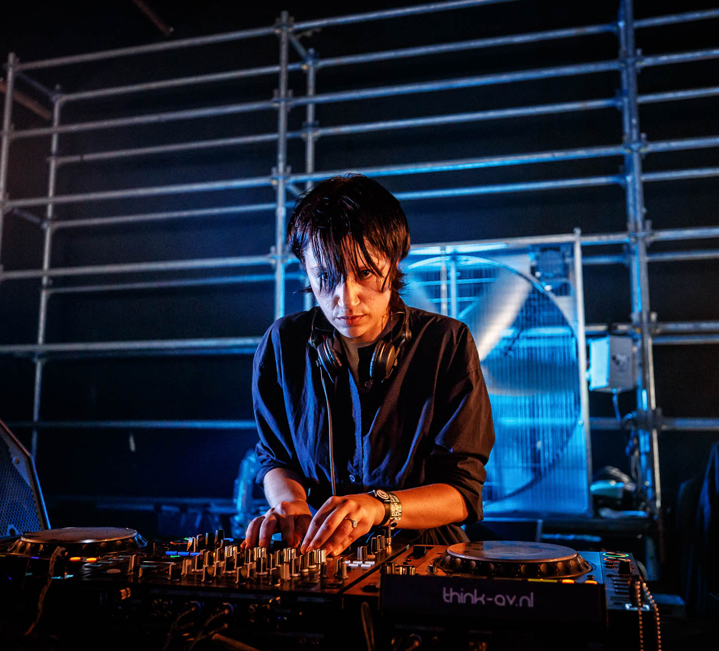 The range of music that can be experienced in even a single hour of Dekmantel is mind-blowing. The festival, now in its 5th year, has evolved to the point that each one of its stages are so well-established and so well-curated, that they act as their own independent and unique entities within the festival grounds. Each is a living and breathing world of music with its own distinct characteristics and flavours. And you are invited to visit all.

Saunter over for a couple of hours to the dark UFO tent at the back of the site and you’ll become immersed in a relentless and unforgiving sci-fi chamber of high energy techno. Slip out and take a short walk left to an entirely different, more organic party experience in the woods – dustier, more lighthearted records fill the air between the willow tree of the much-loved Selectors. It’s been said before, but it’s hard to find a music festival, let alone an electronic music festival, with variety like this. You’ll also be hard-pressed to locate one where people talk about their most-beloved stage as passionately as Dekmantel. Yet despite the old favourites, the most special experiences of Dekmantel 2018 were to be found at their newer, smaller stages. The UFO II proved to be a welcome addition as part of the gentle expansion of the festival. It took shape as a tin structure reminiscent of an air-raid shelter. Its soundtrack: a superb showcase of sweaty, experimental, aggressive and dark electronics from start to finish.

There was also newly improved Red Light Radio stage – a slickly designed black and white church, surrounded by food trucks. The area was intimate and relaxing throughout the entire weekend. At all times, it provided a perfect small-scale party and a sanctuary from the more formal dancefloors. The programming matched the laid-back setting – artists seemed to drop in and out from across festival to say hello, hang out and deliver a set. As the festival got underway on Friday, getting used to the heat proved a major challenge. At times it almost became too hot to dance. People spilled out of the two UFO tents with sweat-soaked outfits and, later in the evening, steam literally rising from their bodies. Elena Colombi, having performed earlier on the Boiler Room stage, set the tone in UFO II with impressive picks of scorching industrial and new beat, before Samuel Kerridge sent everything boiling over with his live performance of noise and punk techno. The atmosphere was angry and uninhibited; at times Kerridge’s screams into the crowd were met with middle fingers (of approval) from the frenzied front row of the audience. These were scenes with an intensity that had not been witnessed at Dekmantel before. As night drew in, Silent Servant took the helm in the corrugated venue. The highest energy came courtesy of the L.A DJ’s choice to play two tracks from the same EP very close succession; both The Sixteen Step’s ‘Promises on the Run’ and the equally brutal ‘Signals From the South’ caused riotous reactions. On Saturday, Shackleton’s live set proved an extremely interesting way to kick things off. The tent was filled with experimental drums and delicate synth lines that seemed to flutter anywhere they pleased. Over at Red Light, the Greek DJ and producer Pasiphae, who is now based in the Hague, provided an excellent start to Red Light’s programming with her slower electro picks, proving she is certainly a talent to keep an eye on.

As the day continued, the electro got faster and faster. Inside UFO II something special began to take shape. Detroit in Effect laid down an enormously enjoyable set that moved from Ghetto House classics to a bouncing all out Motor City assault. The energy was incredible – people laughed along and danced hard to the continuous commentary. The biggest moment arrived in the form of a singalong to the artists’ own electro classic ‘R U Married.’ From side to side, faces were wet, but beaming with smiles. Afterwards, The Advent delivered an equally intense (special 90s) electro set to make way for the heavily anticipated DJ Stingray. As Stingray began, the tent, which already seemed to be at full-capacity, somehow got even busier. He chose to start with heavy, raw industrial techno selections as if to keep an element of surprise, but soon that gave way to his usual neck-snapping electro.

Dipping out of DJ Stingray for some much needed air, it became evident that Amsterdam local DJ Elias Mazian was closing in style over at Red Light. But the Stingray finale was too hard to resist. The final selections were blistering and culminated with a series of trap tunes that literally shook the entire venue.

The final day of Dekmantel saw Identified Patient get underway melting genres in the UFO II with a set full of curveballs to keep the Sunday crowd on their toes. For a second we were Billy Murray in a Tokyo strip club as the electroclash classic ‘Fuck The Pain Away’ by The Peaches unexpectedly oozed out into the crowd. We were then thrown back to a gritty basement in the Hague with DJ Overdose’s equally sleazy ‘200mph’. It was top stuff from beginning to end. Like Identified Patient, David Vunk is a man pretty much built for a Sunday crowd, especially a Dekmantel Boiler Room Sunday crowd. Vunk, with as much infectious energy as can now be expected of the man, delivered a crowd pleasing party set reminiscent of the one at Lente Kabinet 2016 (Dekmantel’s sister festival) that was close to matching the raucous energy and excitement seen of Carista’s excellent takeover of the Boiler Room the previous day.

A real afternoon treat came from local couple Mark Knekelhuis and Merel’s back to back at Red Light. Surprisingly, it was their first, but you couldn’t tell as they moved slickly between hypnotic minimal synth ventures, rough drum tracks, and more organic, cosmic rarities. It was perhaps the most varied set of the entire festival. Everything culminated in the father daughter duo Yeah You’s track ‘Skin’- its ragged synth and punk vocals were lapped up by a crowd that by this point had become very, very hazy. At 9pm, Helena Hauff stepped up to see off the mainstage and deliver a final bang like only she is capable of. Her selections, as expected, were scintillating and raw in their energy. It was a serious display of intent, but a shame that it was difficult to watch her mix the records and witness her enthusiasm from below. Highlights included The Dexorcist’s ‘Dirt Bag’ and her beloved Minimum Syndicat’s edit of George Lanham’s ‘Fullbourn Haze’. However, after the all out electro showcase in the UFO II the day before, It made more sense to head back to Red Light Radio and sway to the delicate, pulsing techno provided by Powder. It was a much-needed, soothing dance for aching feet.

Leaving the venue, you ponder how year after year a festival can maintain and even develop such a rich musical experience. Even with its additions, the formula stays true. Quite simply, Dekmantel is a music festival with such incredible depth because it is designed by people who care deeply about music. Daring, intelligent, and slicker than ever, it continues to lead the way.

We will see you next year.