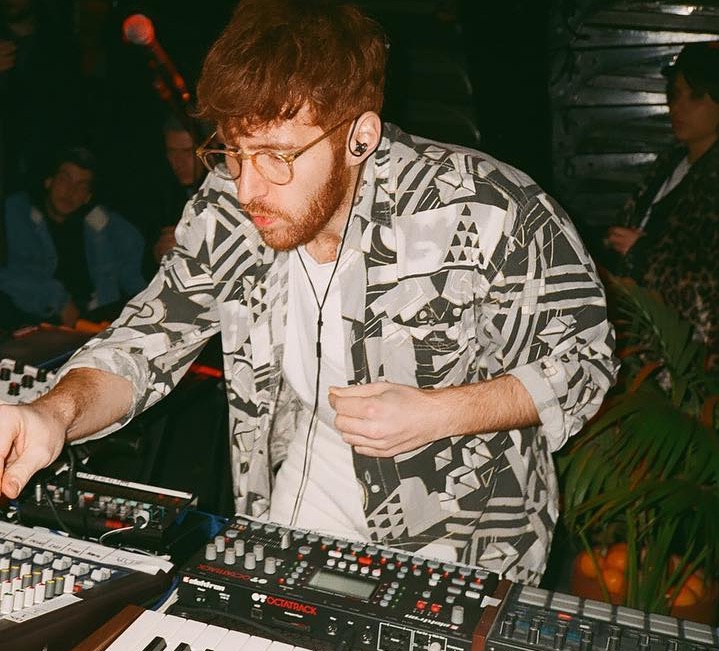 The main operator behind Melbourne-based Power Station and a person of a broad range tempos in his sets as well as his personal production talks with me today about music scene across the ocean compared to here, facts behind his newest release on Pinkman and a collaboration with local troublemakers of Vilnius. You got it right – it’s Kris Baha I’m speaking to.

To put you on board, Kris is an Italian/Armenian born, Australian raised, who had relocated to Berlin a few years ago. He has emerged significantly in the volatile field of electronica and could be recognised on such labels as Cocktail d’Amore, Bahnsteig 23, Malka Tuti and now on Pinkman Records, too.

“I decide on the sonic decisions from the start before I make music which is inherent in the final product.”

Apart from constructing his narcotic industrial sounds in the shadows of his studio and having a duo as Die Orangen alongside Dreems, Kris often drops a trip across European clubs for DJ sets and live performances, where the soonest one is going to be in Opium this Saturday. Together with Calypso I’m up for knowing more about this metal guy and his upcoming madness on the dancefloor. Q: Kris, how much do you think being a sound engineer for yourself helps you with the music recording? Obviously it’s easier and faster to understand the gear and adapt to a new one, but are there any limitations appearing cause of that, too?

A: Interesting question – I have found I am able to hear and listen objectively as well as emotionally as a ‘listener’, so I would say it has definitely helped me, even though it is not a prerequisite to being an artist. I decide on the sonic decisions from the start before I make music which is inherent in the final product. For example, I choose certain pre-amps to get different sound aesthetics (colour). There is obviously the gear addiction phase which I, like others, have gone through (lucky to the ones who haven’t). But that being said you don’t need equipment to have ideas, ideas come first.

Q: I come from Europe. What is a rave like in Australia now or at least at the time you were still living there?

A: I haven’t been there for some time but from afar things look healthy.

Q: You were musically quite unappreciated back in Melbourne, that’s why you moved to Europe, am I right? Why Berlin though, not Netherlands, France, as they also have strong labels and stations, general musical culture, too?

A: I am very grateful for the experiences and opportunities that I was involved with and created back in Melbourne but this is the main reason I moved. There was only a certain point that I felt I could reach and if nobody is into what you are doing then you go somewhere where people are.

I moved to Berlin for a couple of reasons – the first trashy band I was obsessed with when I was young was from Berlin, so I always wanted to visit since I can remember. When I did in 2014 (before making the move in 2015) it re-ignited this nostalgia with the city (not the band). Actually, I wasn’t too interested in the nightlife as musically it wasn’t doing it for me due to being a first time tourist not knowing the right spots which I found out was pretty limited anyways – it was the day time. I finished about 20 songs whilst I was on holiday. Secondly, and the big part of the move, it is a sustainable lifestyle as an artist financially and creatively – if your only income is this, then it plays a big factor in the creation productivity and well-being. Q: Once you visit Melbourne after having moved to Berlin and seeing all the music scenes across the whole Europe yourself, how do you feel once at home again? Is there any musical lacking or is it actually quite the same out there?

A: I haven’t been back to Melbourne since the start of 2017 and I don’t think I’ll be going back this year but there seems to be great crews and people building the scene up all across Australia.

“I played in various bands under the influence of electronic music which lead me into dance music which then lead me to being involved in nightclubs to running my own parties with my brother.”

Q: Do you think there’s a need to have a musical background (play in a band / DJ) to be a successful promoter or vice versa?

A: No, there are no secrets or formulae’s other than to just keep at it. I started making electronic music when I was 12, so for me that was my background. I played in various bands under the influence of electronic music which lead me into dance music which then lead me to being involved in nightclubs to running my own parties with my brother. One thing lead to another and it was all done out of love, nothing was calculated and personally I think things become pretty obvious if you are doing something you don’t really have passion for.

Q: In one of your interviews you said you’re quite requested to give them frequently these days, but you rather prefer to talk over your music. So, what does your music, or in particular, “Can’t Keep The Fact” EP talks about?

A: “Can’t Keep The Fact” was written during this nasty period which everybody goes through. It is a cliche but the EP is a direct outlet on this personal experience. A lot of it is trying to make sense of people who bare a big responsibility yet have 0 accountability. You could say the EP is strains of being politically charged but really at the core it was a personal experience I was going through.

Q: If you could describe a best venue or a place, atmosphere and people around during your live or DJ set, what could it be like?

A: An empty crypt equipped with strobe/smoke machine and all the black leather freaks.

“The people of Lithuania are incredible party people, that ticks 1 box for me. Secondly, I feel like I have a home whenever I come to Lithuania and this is due to the genuine nature of everybody, this is instilled as the clubs ethos, I feel.”

Q: When you’re out for your trips to play in different locations and you don’t nearly have time to think of your selection for the upcoming night (does that happen though?), do you tend to build up the mood of your set on the go in the club or still try to make predictions by gathering some prior information of the venue?

A: I will definitely prepare my records the night before I leave and same with my usb but a lot of it is being there at the party and whilst I do DJ by mood, a lot of it is how the party is in that moment, it’s a cliche but that’s how it is. Q: Apart from being a main operator of Melbourne-based Power Station club night and the label, you also run Power Cuts sub edits-label. On July, 2017 a new EP came out – “PC-003” with a dark and slow collaboration of fellows from Lithuania “Siaubas”. Can you tell more about it and the idea how it reached the surface?

A: We stopped the party in 2016 and just keep the label running now. The Siaubas signing came about after my first trip to Vilnius in 2016 to play at Opium. Tadas (1/3 Siaubas) who invited me to play at his party Juoduomenė gave me the full Opium experience with an after hours in the hotel along with a few others from the party. Anyways, he happened to have his computer and we listened to a bunch of demo’s and I loved what he was working on but there wasn’t anything that grabbed me and just before he closed his laptop he remembered he had 1 more little idea he was working on, “Haunted White Paper”. He played it and I signed it there at 2pm Sunday afternoon.

Q: You’ve been a frequent visitor of Opium club in Vilnius and have quite often played together with our residents elsewhere. What are the things you like about it and generally electronic culture of Lithuania?

A: Well first off, the people of Lithuania are incredible party people, that ticks 1 box for me. Secondly, I feel like I have a home whenever I come to Lithuania and this is due to the genuine nature of everybody, this is instilled as the clubs ethos, I feel. Also, musically speaking I get to play a lot of stuff I might not get to play anywhere else.

Q: Any upcoming plans for yourself we should be aware of the most throughout 2018?

A: I have an LP I am finishing up which is something a little different from me, plus I’ll make a return to Power Station and have a few appearances on Pinkman and Opium’s “Opium Of The People” compilation. On the remix front I have recently finished one for Joakim (out on the Vinyl Factory soon) and there will be some others for Boys Noize, Djedjotronic, Inhalt and Juan Ramos.

Q: And traditionally – what should we expect coming to your live set this Saturday in Opium?

We got you, Kris. Wait for us to prepare some dark crypt atmosphere for your appearance in Opium and see you this Saturday along with other black leather freaks.
Juoduomenė: Kris Baha LIVE 04.21