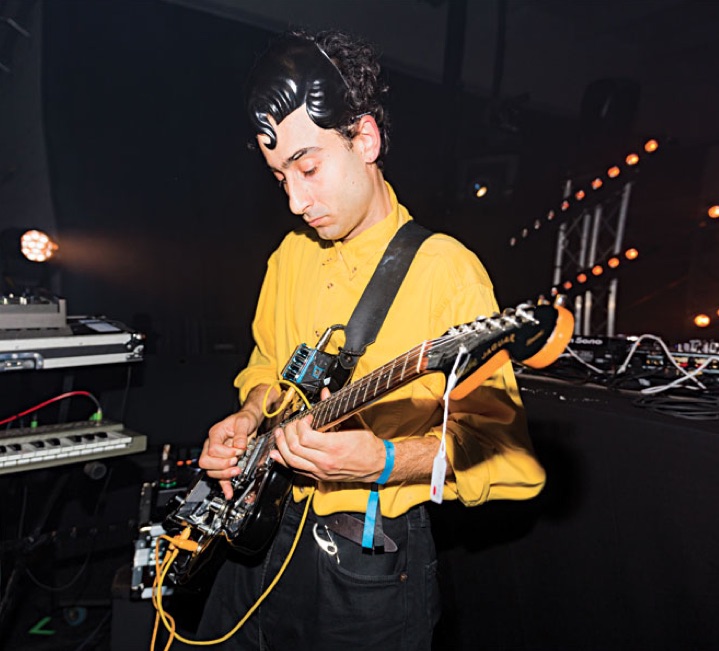 Hardware enthusiast Maoupa Mazzocchetti has been on Calypso radar for quite a while now. He’s the one who obtains his alias from a South African serial killer, nearly pushes his bed from bedroom to be able to fit in more gear for his DIY studio, slips out his first debut of a paired down vinyl on Unknown Precept while having other appearances on such labels as PRR! PRR! and Mannequin, and in general is a sincere weirdo who’s live shows you wouldn’t want to miss out. In fact, quite a recent one in Vilnius was last March and we’re already looking forward to bringing him back here.

Calypso took a chance to meet up with Maoupa directly to ask a couple of things. Head down to check what’s in there. Q: You’re a French-born, but Maoupa is a Belgian project. It still seems you have more gigs in France, rather than in Belgium, am I right? Why is that so then?

A: I don’t really know. It’s probably because the music I’m doing doesn’t really talk to many promoters there. This fact is the same to many musician and DJ friends there, too. Living in Brussels, it feels that many promoters put their eyes far from their own city.
At certain point this is a good fact to show something new and different. But your local scene may also deserve to be shown even more.
Currently, many places are closed in Brussels, as some 🧀 rats are everywhere trying to catch the wrong Cheese. This means difficult times for the promoters to find a nice place with a real and right sound system, right deal, right technical stuff, fair neighbourhood and, of course, a nice staff who is trusted and understands what you are doing.

Q: Which scene of these two countries do you think take the top and why?

A: I don’t live in France for 6 years now. It could be a bit speculative to talk precisely about the scene there. I mean, a scene is not palpable even before going there to experience it, because you can not really feel a scene just due to the records or internet.
For sure, trying to find the top is a wrong way. From a producer’s point of view, this approach makes you forget what you really want to do, it just turns you a follower trying to copy stuff from the most famous scenes.
In a perfect world, each scene in every country and city would be totally and radically different, and everyone would try to create their own cheese. Wolf Eyes was something most interesting I have heard last year at Vision Festival, 2017. Also, Asa Chang and two projects released on Hausu Mountain called “Do Pas O” and Rick Weaver.

Q: Describe Maoupa’s sound. What musical techniques/features could distinguish your live acts from other artists’?

A: Laughing about tools to glowing in the dark. Killed my ego to build a new one to be able to find some new Cheese!

Q: Group-A sounds quite similar melodically and even reminds a bit of you during their live sets. Could these two women have influenced you somehow before or vice versa?

A: I didn’t know Group A before I met Tomy at OHM club in Berlin during the Mannequin Night for the release party of my “Laugh Tool” LP. We talked a lot together after my show. At the end she gave me her business card. I felt it very interesting to give a business card with the name of her band and the Soundcloud link.
Right back to brussels i listened to Group A for the first time and I liked this Cheese. We are still in contact up till now. Q: What gear do you usually/mostly use during your lives?

A: It could change depending of the place. For example, in club I’m often limited with space and technical needs compared to a concert place where I’m more able to develop the live show at it’s best form. This is why I’m currently trying to develop my live shows in a concert place.
Currently I’ve used 707 – 606 – Pearl S.Y – SH101 – Guitar – Tabla – Voice – 1 CDJ2000 Nexus – Loop – Effects – Tape and trying to not get stuck behind a fucking DJ booth during the show!

“The Cheese is your best friend
This is me
This is also you
This is what you still know.
This is what you’re trying to know
Open your ears
Keep your eyes and nose open
The Cheese is everywhere for you.
Smack your truth
There will be no one to give it to you.
I’m fair
You need to know the real
Before to know the truth
Be careful as you manage to catch Mr. The Cheese
The Cheese 🧀 and the vulnerable hungry Homeless
you saw everyday in the sewage without seeing him
doesn’t like Rats.”

Q: Once you have said that current electronic music is attached to club music and is meant to make people dance, even though in previous generations it was more experimental and had avant-garde aesthetics. Would you then rather prefer people to listen carefully and discover sounds during your live sets or take it more as a “electronic/techno” music and just dance to it?

A: I don’t really think about how people digest my music as long I provoke something. I prefer to see someone exasperated by my show rather than someone who was passive without particular opinions. Any feelings I could give to someone is a success to my eyes. All this based on the fact I’m satisfied with 🧀 myself with what I’ve done and I’ve given. At the end this is just an advertising for me and for those coming to experience it. Personally, I’m never the same after experiencing a piece of art that has touched me in any way. Stronger feelings change you.

Q: You have recently collaborated with Beau Wanzer on a project “De-Bons-en-Pierre”, also with Eindkrak, Air Lqd and Nick Klein. Could you mention other artists’ names, which are currently big and influential for you?

Q: You’re also a graphic designer. Let’s say I’m Trenton Chase and I want to hire you. What kind of outcome should I look forward to?

A: I can not answer better than this. Q: I guess your studio is also your bedroom? If you had a chance to take out anything unnecessary from it (if you haven’t done that yet), how it would be left looking like?

A: Because last year I was starting to think about to take my bed out of the bedroom, I decided to take out my studio from the bedroom to a magic studio called “LOOP”.

Q: You have quite recently started your monthly radio show called “Between the Sewage and Segway” which is created to turn away from conservatism and get towards a past-embracing but always forward-looking music. “Elastic music for elastic ears”, as you called it yourself. Can you tell more about it – idea behind the name, it’s location, artists you choose to participate in?

A: I also choose to sometimes invite people who’re not DJ’s, producers, label managers or promoters. Who are just friends or people I met, the ones who are listeners and passioned by music. This is very interesting to host people far from this DJ game or club culture because they are playing as it’s a life or 🧀 death question. This is beautiful and it often works. You can check all shows here.

“People who are expecting your things even before yourself make you like like a fake magician. But I’m not a magician. I’m trying to be a magic myself.”

Q: You’ve also recently shared a new track “Looking for Cheese” for The Wire Magazine. Is it the one from your upcoming EP?

A: Yes, “Looking for Cheese” will be released on my next LP on Sony Music Brittany France.

Q: You’re always up for having some weird visual stuff along with yourself like masks, plastic haircuts, toy hand to put on finger. What new should listeners expect to see during your next shows?

A: People who are expecting your things even before yourself make you like like a fake magician. But I’m not a magician. I’m trying to be a magic myself.

Q: Maoupa, have we found the cheese yet?

A: We are all so far from finding The Cheese!

Hopefully we’re not that far from catching it, so as Maoupa himself, either it’s a contemporary electronic production or experimental of the late 70’s or 80’s.