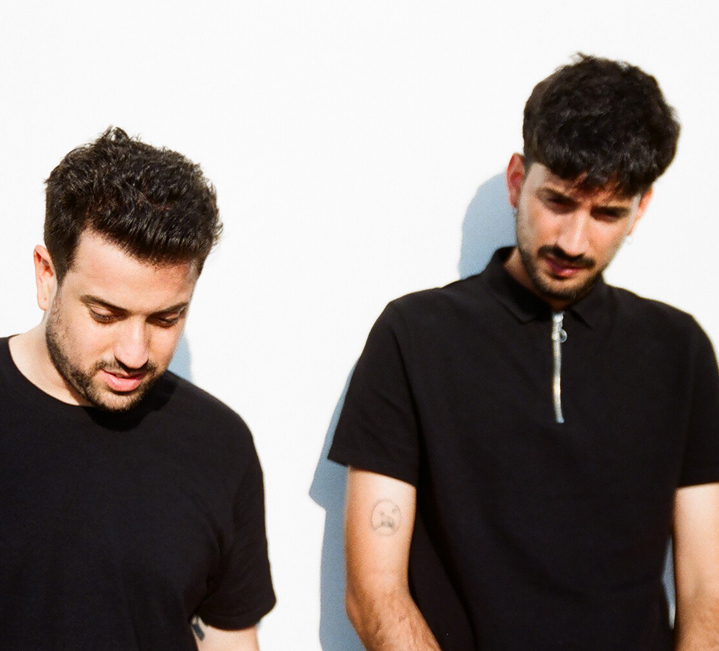 TV.OUT is an Israeli project of two guys that are already well know due to their appearance on L.I.E.S. label as well as their own curated one called Parallax. Right before their first time playing in Lithuania, we took a chance to catch up with them and talk about their personal take on music production, past and future releases on other known labels and left-field electronica in their home country. Take a dive in their in-depth answers and enjoy them as much as we did.

Skipping the introductory questions on how you both guys met, could you describe your music production process – the way you work together and how easy or complex do you personally find it?

We work all analog at the first step of the production, or should we say all outboard gear, we have some digital stuff, too, but all outboard. There’s a couple of drum machines, synths and pedals, all connected to a mixer which plays a big part in our creative process, we use the mixer as an instrument almost, playing the faders and aux sends. Then every channel from the mixer gets multi track recorded to Ableton and from there we guess it’s step 2 – we fine tune the arrangement, doing some mixing with in-the-box plugins, maybe adding some stuff.

The way we start a track usually is by playing around with the gear, someone is on the drums and the other one is on the synths and us both on the mixer and pedals. Most of the times we have something in mind, an idea for a certain sound or a certain atmosphere, jamming until we get to a point that we like and then record the track live.

We try to do as little of editing as possible to preserve the feel of that moment. There are moments in the studio while making a track that both of us have different ideas to where the track should go. We are kind of 2 different persons and sometimes we have different influences musically. That difference creates something we like, that’s the point of being a duo for us, where each one have his input. We guess this is what defines a TV.OUT track, that point, where 2 different perspectives on things meet. If we feel the gap is too big, and things don’t work out, we stop and talk about the track and what to do next, or maybe one of us continues solo and finishes the track. From what I’ve been following with your production, I do hear some connections towards other big names in the scene, as well as a little of the Russian producer Gesloten Cirkel. When it comes to speaking about relevant artists, who, in your opinion, have strongly influenced you?

There are a lot of artists that we are inspired by, I guess in current period of time it’s Broken English Club, Tzusing, Silent Servant, Beau Wanzer, Charles Manier, Liaison Dangereuses among others.

You have your first split EP released in 2014, last one just this year on L.I.E.S. How do you think your sound or the way of music production might have changed over the period? How would you describe your sound now?

From our first release until now our studio changed quite a lot and so has our sound. We had fewer machines back then, MPC 2000XL was the centre of that and we didn’t multitrack, we recorded the 2 track coming out from the mixer, often to cassette. So what we recorded was the track with no editing or mixing capability.

Throughout the years we realised that we needed to start to multi-track, so that we could edit and mix the tracks. Having no way to mix or edit them caused a lot of tracks to go to waste; sometimes we liked the track, but it’s overall sound would be a bit off, or if we wanted to delete or change a certain element and we couldn’t do that.
So since then, about 2 years ago, we started to multi-track, but we had to figure out what was the best way to do that and get the computer involved but still keep that jam feeling. We had to find the right balance between computer and our way of feeling comfortable. We still try to figure out how to improve it all the time and brainstorm about our setup as we speak. Basically, we persuade the perfect setup for us and along the way of making tracks haha.

“It’s kind of hard for us to describe our sound now, it varies from track to track and from setup to setup. Each track is inspired by a certain genre but there still are elements from all over.

Our tracks throughout the years shows that. We tried different stuff and kept exploring, and as time went by our sound became more specific and our setup became better. Every machine we purchased over the years changed something in the way we approach production, some more, some less. One of the biggest game changer was the Octatrack with it’s midi sequencer capability. Before that we used to sequence synths with the MPC and the Deopfer Dark Time sequencer. The Dark Time was great and we used it all the time but it’s really limited to have only one step sequencer for your synths, so we used it sometimes as 2X8 steps sequencer to get more out of it. Then we got the Octatrack, which is basically having 8 Dark Times simultaneously with a lot more features.

As for replacing the MPC as the main sampler for drum sounds, we used the Octatrack for a while with a midi controller connected to emulate the feel of a drum machine but it had it’s downsides, so we got the Analog Rytm MKII but still didn’t feel right in our setup, so we sold it last week and got the TR-8S. We feel we hit the jackpot with that one, as it’s amazing for what we need. It’s a game changer #2 and we can’t wait to see how our tracks will evolve, since the evolution of our setup has a big impact on our sound.

It’s kind of hard for us to describe our sound now, it varies from track to track and from setup to setup. We have a lot of inspirations like Electro, Jak Beat, New Beat, New Wave to name a few. Each track is inspired by a certain genre but there still are elements from all over. Sonic wise, we are still learning how to improve our overall sound and our mixing technics to get it where we want to be. It takes a long time to sound like yourself, mixing is not so easy for us, as there are a lot of variables like studio acoustics, monitors, converters etc., also we switch studios quite a lot and every time it takes a couple of months to get used to the sound of the new room. We are always experimenting with different mixing methods and gear (plugins and hardware) to find the sound that we like the most. It’s an on-going process but our methods and the workflow evolves along the way. Sometimes we wish our signature sound to be stronger and more recognisable, but life’s changing all the time as well as we don’t feel the same everyday, and that reflected in our music.

Following this topic, the first EP of yours was released on Parallax Records that you formed with a few of your friends. Stating that it’s mission was to gather left-field electronic producers from Israel, how do you feel about this label now – do you think you’ve achieved your goal over these four years?

When we started Parallax, there weren’t many labels in Israel that focused on electronic music and if there were, Israeli producers didn’t really take a part in that. We wanted to showcase the under-the-radar stuff that less known producers were doing here.

We feel that over the years our work payed off, the “left-field” music became more popular in Israel, inspiring artists to push the boundaries, more smaller producers got attention and good amount of labels were founded, giving more recognition to the scene in Israel.

For now we’ve decided to focus on releasing records with our own music along with Yogg’s and Pharaoh’s, but still keep an aspect from our goal in the beginning and keep on doing the CD compilation series called ‘Under The Radar’ with upcoming unknown producers from Israel and do parties showcasing less familiar acts.

We have seen quite a bunch of talents coming from Israel, some of them have a good connection with Lithuania, as well. What’s your personal opinion about electronic music scene in your home country? Is it a good place for artists to maintain their freedom of creativity?

“We feel these are good times for music, more and more interesting and not ordinary stuff is coming out and it helps to expand the mind and the horizons of other producers.

The scene is great; with a lot of creative people, artists and DJ’s parties can get pretty crazy here. We have to say, though, it’s not that easy to only focus on music and have creative freedom while maintaining a career as a DJ/producer, since it’s super expensive to live here, sometimes making people struggle to make ends meet. This affects your mental state and also takes up a lot of your time.

Let’s give a try to a more abstract question this time – what’s your opinion about the art of electronic dance music in general as well as it’s production? Quite a bunch of producers I talked with, they tend to speak about aiming towards the imperfection of the moment of creativity. What’s your take on that?

We feel these are good times for music, more and more interesting and not ordinary stuff is coming out and it helps to expand the mind and the horizons of other producers. That imperfection of the moment is also our concept in a way, it’s human.

I’ve seen Digital Tsunami crew playing over in Tel Aviv for a few times already, as well as Teder.fm, which I found rather tiny but cosy-looking, having visited the area personally last winter. However, I assume it’s your first time here in Lithuania, right? What’s your expectations for the night you’ll be playing?

Yeah, first time in Lithuania, we are following Digital Tsunami and Opium club for a while now and really like what they are doing. We’re really excited to be playing there!

As for the last question – anything interesting you both got to share with us from your production side?

2019 gonna be exciting for us, we will be based in Berlin for a couple of months, do some music and tour. We already have a busy release schedule, debut LP on Dark Entries, EP on Parallax, second EP on L.I.E.S. and a track in a compilation for Veyl.

Looks like a lot of plans are waiting ahead for these two. As much as excited we would be for the upcoming months, look no further this time and make sure to pay a visit to their first show in Vilnius – Digital Tsunami: TV.OUT 12.21