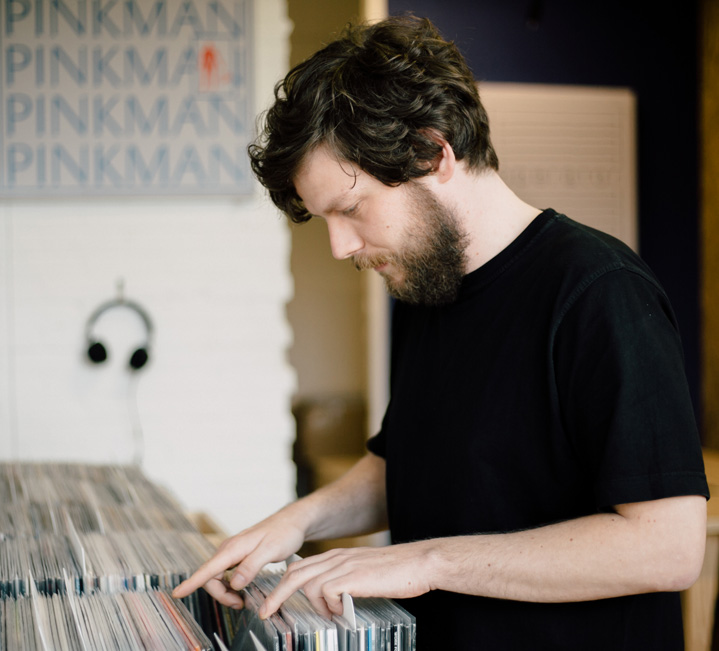 Head of gourmet and prolific Rotterdam’s record store and label Pinkman, Patrick Marsman has it’s own position in electronic music scene that we care of. Having displayed skills in harnessing successful platform for artists and music lovers to meet at, Marsman has maintained it for five years already and the time has now come to mark it accordingly. Right before making his first ever appearance in Vilnius, Marsman discusses with Calypso about the roots of Pinkman’s label and co-founded Operator project.

Coming back to the roots where it all began with you having moved to Rotterdam – how difficult was it to start running a label and looking up for artists to collaborate?

When I moved to the city 7 years ago, I felt a certain creative energy floating around in Rotterdam that had a positive effect on me. This was my biggest drive to also create something and start the label. I didn’t know anything about how to run a label, but I did it anyway. Back then I couldn’t ask questions to other label owners, since I didn’t know anyone yet. So I had to learn it the hard way, which was also quite an adventure.
When it comes to finding new artists, back then (and still) I was influenced by the whole Dutch west coast scene, so I had some unreleased music from people connected to this movement on my HD. I was playing these tracks out on parties, but I had to have it on vinyl. That’s how the label was born. After a few releases people started to send me interesting music, and also my network expanded. Which made it a lot easier to get access to interesting music to release. Charlois is a Pinkman’s sub label. What was the reason of giving Pinkman an additional branch and how different is it from your own perspective? Do you ever have any difficulties deciding which artist should belong to which label?

Over time Pinkman matured as label and somehow naturally developed a rather dark sound with a strong visual identity to accompany it. However, I still have a taste for more high-spirited music, as well as the desire to release that kind of stuff. This is basically how Charlois was born. The decision on which sub label an EP will land is instinctive. All I need to do is hear the music once, and I simply know where it will be released.

On the same note, could you explain Broken Dreams series? Perhaps white pattern is not the only thing to follow?

At some point I began to receive a lot of music that was rougher, heavier and more intense than the releases on the main label. I was really digging that stuff, and felt confident that I could curate it in a way which will make sense to my audience. The concept behind the Broken Dreams series is that I wanted the music to speak for itself, without any visual distraction. So I decided to just release these records in a white disco sleeve with only stamps on the labels. Just as stripped back as the sound.
At last I want to say that, as it has done in the past, the directions of the labels will change in the future. But you guys will see when that happens (smiles).

“Over time Pinkman matured as a label and somehow naturally developed a rather dark sound with a strong visual identity to accompany it. However I still have a taste for more high-spirited music, as well as the desire to release that kind of stuff.”

Operator radio is a rather recent co-founding project of yours and it’s obviously a successful one, too. Perhaps you’ve given too many replies on how it all started, so let’s give it a twist – what were the trickiest parts of putting it to daylight?

For me personally, working in a team again. When it comes to the labels, I always did everything myself and made my own decisions. Now suddenly I had to work with people that had certain opinions too, which I had to respect haha. Ultimately I have no regrets, though, because it really helped me grow as a person. In addition, money was a real struggle in the first year. We’ve invested a lot out of our own pocket, because we believed in the concept. And even to this day every single cent that we make with it, flows back into the station. I honestly believe this is the way it needs to be done if our goal is to keep making the platform better and better. Lastly, setting up an online radio station like this is very time consuming, and we all still have jobs next to it. Nevertheless, we are all very happy we did it, for us it feels like giving something back to the city, providing a platform where different scenes can come together. It feels extremely rewarding.

You’ve also successfully crowd-funded the station this summer. What are the toughest aspects of maintaining such radio? Is there any additional support from elsewhere?

Yet again, lack of funds. Currently we only make money by (co)hosting events and selling merchandise. On one hand this is tough, on the other hand it keeps us independent.. something which is really important for me personally. I’m open for collaborations with brands that fit the vision of Operator. It has to be done our way, though.

What the gathered fundings were/will be used for this time?

The first year we used our own personal equipment for Operator. It was time to change that and buy gear that belongs to the station. So we bought a bad ass Funktion One system for the studio and the newest CDJ2000 players. We also invested in a mobile set-up so now we can do more streaming on location. Next to that we created a little buffer to pay fixed expenses like hosting and rent. We also had to pay off our initial personal investments. You once mentioned Operator is also meant to be a place where DJ’s could come with their friends and meet other people who are into music, perhaps even make some collaborations. Are you aware of anything born this way?

Well, a lot of music related friendships are born, that’s for sure. Some Operator DJ’s are now playing at local events which they didn’t do before they had a show on the station. Also some guys are now DJ’ing b2b together because they found out through the station they have a similar taste in music. Last week I heard an intern of us is jamming with Gamma Intel, a local guy from Rotterdam who will have his release on Pinkman soon. So yeah, to answer your question: collaborations and friendships are definitely born because of the station, and we’re very proud of that.

Does it feel like there was any tension coming from Amsterdam and it’s music movements and knowing that they could push Rotterdam out of radar? Or maybe there’s an actual support from the city?

With Operator we really wanted to create a music platform for Rotterdam without any competition feelings towards Amsterdam. And yes, we actually had big support from Red Light Radio when we started our project. To be honest, this whole Amsterdam vs. Rotterdam thing is kinda silly and has more to do with rivalry amongst soccer teams, which I don’t care about at all.

Name a couple of records that come to your mind thinking of Pinkman label?

That’s a tough one, because every release I do feels like a child to me and they all have their own story. I made a lot of new friends through the label, so I guess have to mention the releases from Identified Patient, Dollkraut, Roberto Auser, Ian Martin, Betonkust and Antenna to name a few. These are all local guys that I also see on a regular basis just to hang out and have a good time with. I also have to mention the releases I did from Alessandro Adriani. I think he’s a very talented musician and next to that I have major respect for him and the vision behind his Mannequin imprint as well. I have to say though, it sucks that I can’t mention all the artists on the label, because without them there wouldn’t be a label.

“We are all very happy what we did (with Operator), for us it feels like giving something back to the city, providing a platform where different scenes can come together. It feels extremely rewarding.”

5 Years Of Tears parties were already held in various spots of Europe to this day and two strings of releases were presented for that matter – a second release including Kris Baha, LVRIN, Retrograde Youth and few more artists will be out this December. Is there anything else we should be prepared for the anniversary till the end of this year?

Well my initial idea was to present 5 various artists releases to celebrate the 5 years of the label, but it became just 2 volumes due to delays and also the amount of work. I still have a lot of good tracks that were meant for this serie, so I’m going to put these out next year on a 2×12”. We also have plans to drop new merchandise soon. Next to that, there are some label nights at the end of this year that haven’t been announced yet, so keep an eye out of that!

Thanks, Patrick, Pinkman is definitely a record label to keep an eye on, as well as anything related to it, let it be 5 year’s anniversary announcement or a release of an artist we are yet to discover.
Marsman is coming to the dark floors of Lithuanian club scene to celebrate Pinkman’s special quinquennial this Friday. Along with him, a Dutch representative Identified Patient and aquaculturist of a local Digital Tsunami organisation, Ernestas Sadau, will make sure to keep the night steady.