Cocktails And Records At Bar Amadeus 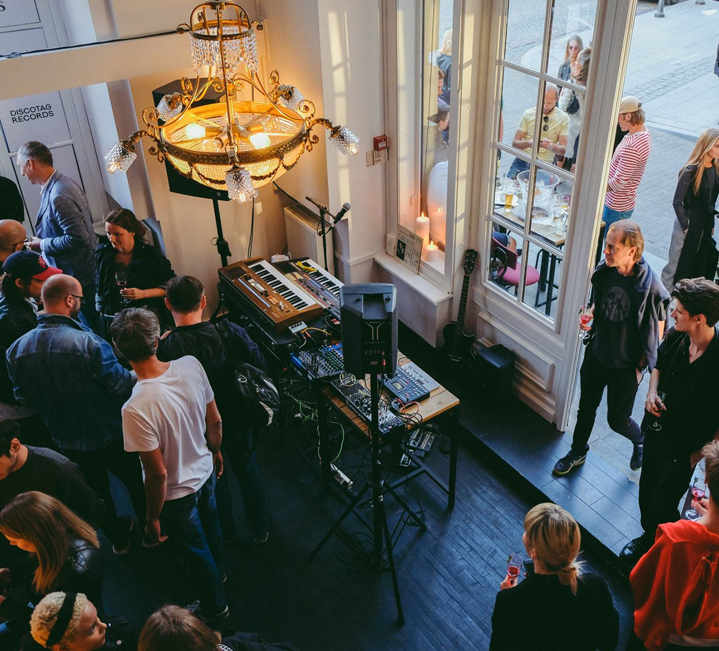 From now on digging through records with a refreshing drink will be much easier in Vilnius. United under the same roof, Manfredas, the co-owner of Bar Amadeus, and Arnas Gataveckas, the man behind Discotag record shop, have to offer some unique experiences for the locals and city guests.

Cocktail and DJ bar Amadeus kicked off with its launch party by warming up all the area nearby. Headline artist Dominique Dumont welcomed the audience with a charming performance radiating tropical heat while the guest DJs made sure that the dancing wouldn’t stop easily afterwards. It was enjoyable to see visitors consisting of music enthusiasts from different generations – ones that pioneered contemporary clubbing culture in Lithuania and the younger generation catching up with traditions of partying. The record shop just above the bar was opened for people to engage by offering a wide selection of freshly released music covering such labels as Clone, Rush Hour, Knekelhuis, Stroom, Neubau, Dark Entries, Pinkman, Dekmantel as well as relevant releases from local labels and a box of Manfredas’ special selection for Discotag’s guests. Overall, it’s a cozy space not only to listen to records but also to participate in events where DJs can select and present their own records.

Having a belief that Amadeus will bring a new perspective to the local music scene by attracting quality artists and DJs from local and international scenes, we brought together Manfredas and Arnas to give us some insights about the future of this co-space. Q: What was your personal impression of the opening, did it exceed your expectations and how do you feel about the future of the place?

A: It’s not the first joint that me and my mates are opening so if even it’s usually a great party, I don’t get too excited as more important is how you sustain after. Middle of the summer is pretty much the worst time to open a new place, but that also gives you space and time to fix things, see what’s missing and properly get ready for the autumn when things get real busy.
I’m feeling good about the future as there are nice things already planned and I think Vilnius was missing a small spot where you can hang before you hit the club or when you don’t feel like partying and just wanna listen to a nice selection, interesting live performance or have a couple of drinks while browsing through the records upstairs at the shop.

A: I think we were a bit misunderstood from the beginning. Amadeus was never meant to be a club or a proper dance floor though I’m not saying there won’t be any baile going on. Who am I to stop the fun? Though my goal is to carefully select nice small things for open minded people. For example I’ve just invited Lithuanian flute player Saulius Petreikis whom I have recorded for couple of my tracks to do a solo show or an amazing cello player Andy Otto or Latvian wunderkind Sing Libra. None of it is club music. But don’t freak out, it’s not gonna be only some alien shit for snobs. Another thing that I’d really love to happen in this space soon is Sunday daytime parties. I don’t wanna compete with clubs, it’s more about brining something new.
And then it’s not only about music. We are having a lot of fun creating a good cocktail or a tea menu. We’ll be teaming up with our fave restaurants to bring you some nice food.

Q: Could you compare Amadeus with any other bar outside of Lithuania to give us a better impression of what to expect from it? Are there any places that inspired the concept of the bar?

A: I like multifunctional spaces, I think beer brewery & yoga studio was my favourite to visit. Record shop and a DJ bar is way more obvious combo, but it’s the only one here and that’s still pretty cool.
When I lived in London I used to go to this place called The Gun that my friends often play. It’s about the same size as ours, small joint where nice cocktails are served and you can catch someone like Nathan Gregory Wilkins or Ivan Smagghe selecting music on Sunday night. Of course, there are million DJ bars out there, but that one might’ve played a little role as I was always thinking that this simple concept is something that is still missing back home.

Q: In one of your previous interviews you mentioned Amadeus will be a DJ bar where you don’t need to dance but if someone wanted to, no one would stop them. Please elaborate this exciting idea.

A: Well, that’s what DJ bars are about. The set up we have is not stobe lights, smoke machines or a very loud music, but in end it’s the business of the artists and the crowd and where they feel like going. It’s just less commitment from both sides.

Q: Was it a lucky coincidence or did you plan to bring the Discotag record shop of Arnas Gataveckas under the same roof?

A: I’m not sure why but basements or upper floors work very rarely for the bars and restaurants in Vilnius so we needed a creative solution for our “balcony”. I’ve been buying records from Arnas since he opened and we were chatting about doing something together for a while so when Amadeus came about the puzzle was complete. Q: A few years ago it was nearly impossible to get quality records of contemporary underground or experimental dance music scenes within the borders of Lithuania. Was this your primal intention to make this type of music be more available and easier accessible in Vilnius? A: Maybe not the main factor, but quite important one for sure. Lithuania has a vibrant club scene and it felt like the record shop was somewhat a missing peace. And Vilnius is my hometown so it was obvious choice do it here.

Q: I believe you went a long way to build a quality record shop. What was the hardest moments starting the business?

A: It all started just with record collecting habit some years ago and progressed on to record shop idea very slowly as selling physical music is really challenging venture.
Also, a lot of yes, no, maybe, not sure bullshit was involved, but now it’s a reality and it is still an ongoing process. I have never worked in the record shop so there are lots of small details that I need to figure out to make all operation run as smooth as possible. It’s quite a bit of admin work as well, excel tabs and shit – can be boring sometimes.

Q: Even though Discotag is still a relatively small and young record shop, it offers a great deal of different and authentic music. Do you have any plans for expanding?

A: It is nice to hear that there are people who think that Discotag is good quality shop or has decent selection etc. So, I guess, to keep these standards as high as possible for as long as possible is the main goal for the future.
I also hope we can expand our distributor list and get more fresh music aboard.

Q: What’s your impression on having started sharing the same space along with Bar Amadeus? Do you have any certain future expectations related to this turn?

A: So far, so good. We hope this collaboration will help us to push vinyl forward and will also become nice hang-out place for people who loves music in general.