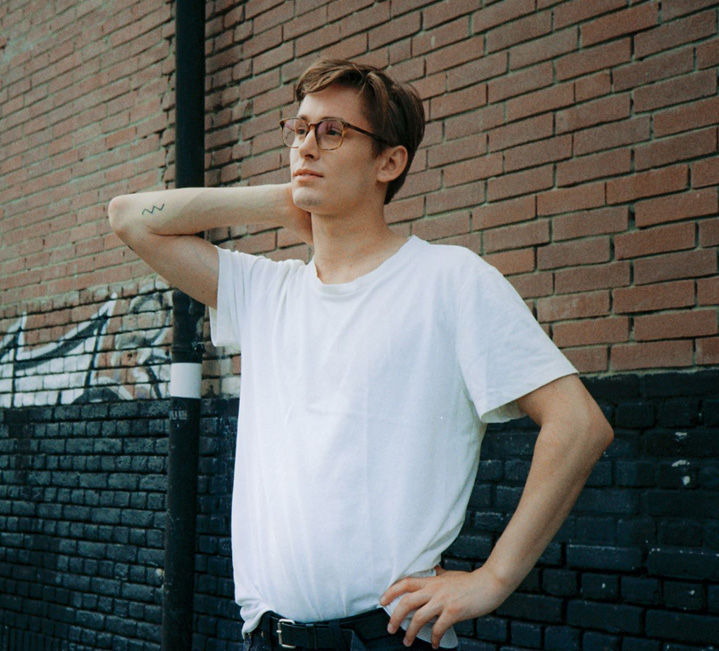 Job Sifre is no longer a newcomer to the electronic music scene being only in his mid-twenties and having already released two records Bestaan and Worries on well-known and our appreciated Dutch record labels Knekelhuis and Artificial Dance. Job’s energy and smile during the sets have already become his signature looks and boy, you never know which range of BPM he might choose for the night, which makes it even more unexpected.
I spoke with Job right before his second time in Vilnius about our shared interest in electronica underworlds, Red Light Radio’s and other Amsterdam’s cults and what’s it like to be having stepped out of music production shadows.

The first time I heard the snippets of your Bestaan EP on Knekelhuis, they instantly caught my attention. Having been described as a solid EBM fuelled electronica, it’s still rather very different from the one you’ve released on Artificial Dance. Could you share any musical inspirations or other secrets that have influenced you on this sound?

First of all, I am happy it stood out for you. I have been on a search for music for a long time, and every time I find something new, it changes my sound too. Most songs of the Bestaan EP were made before the tracks on the Artificial Dance / Worries EP (except for the title track). My mood and the music I listen to really define the sound of the tracks I make, but as I am very versatile in my taste, the outcome of the tracks, whenever I make them, can be really different each time. Also, Mark (Knekelhuis) had more an eye for the darker stuff, and Olf  (Interstellar Funk, Artificial Dance) more for the more dancefloor/wavey stuff.

Always wanted to ask though – is that your voice on that EP, too?

Yes, all the singing is me. At this moment I am also working together with DJ Dorien, who also does vocals, but I am not sure when those tracks will see a release, yet. You’re still rather new to the music scene. However, speaking of DJing, do you feel you’ve changed somehow over the time? I once read you saying you never wanted to be serious while playing. How do you feel after a bunch of parties you’ve attended so far – do you think your image has changed at slightest?

I DJ for about 7 years now, but only “professionally” for a year now. I still don’t want to be serious, I want to just dance while playing, play around with genres, challenge people to go wild, do crazy stuff. I play to make a party, not to show off how incredibly credible I am. That being said, I wanna do so while playing stuff that’s on the border of “too weird” or “too hard” or “too difficult”. I must admit, it is not always easy to give everything while you’re playing weekly, sometimes you really have to work hard to find the right vibe for the crowd and place. Sometimes, when it needs some hard work to get it going, I might seem very serious, but please remember: that’s just because I am trying to find the right sound for that night!

Not happening any time soon. Maybe in a couple of years. I just saw Parrish Smith DJ with a mic, at De School this weekend (fucking amazing), so that inspired me, but for now it’s a long way for me before doing a thing like that.

Do you think a person has to have some sort of musical background from the past to be able to start producing or it’s all just a hard work and willingness to learn? How was it with your own experience?

It depends. If you consider “musical background” to be theoretical, then no. I do think you need to have an unnaturally obsessive interest in a specific type of music to be able to motivate yourself to learn the first steps of producing. I was always interested in making music, but hated being in guitar or piano class. So over time I taught myself. If you’re not willing to spend 5-10 years making super stupid songs, before making your first good one, it might not be for you. If you have a bit of a theoretical background, then you might be able to cut off some of that time, but that’s the thing about electronic music: when you’re starting, and are super bad at it, you’re at least free to make it the way you want it without having to apply rules from musical theory and develop your own ways and sound.

How’s it going with your time management? You’re studying at the moment, from what I know, so how do you feel combining it together with your touring?

Well, it is not as fun as it might sound, haha. Touring is pretty time consuming, when I have a busy weekend it can take up to Tuesday of even Wednesday before I’m 100% back on my feet, and ready to focus fully on my study again. I’m writing my thesis now, and I am still on schedule, but it’s hard work. The next couple of weeks gonna be harsh, as I play two international gigs per weekend for two weeks in a row, while also having to finish the research I am doing for the thesis… Few words about the city you reside in – Amsterdam is great by many means, but what else you’d highlight apart from Red Light Radio? De School is unfortunately closing down rather soon, Garage Noord seems to be on the spotlight now – what else is worth to know or where to dig good vibes at?

“In electronic music you’re at least free to make it the way you want it without having to apply rules from musical theory and develop your own ways and sound.”

Garage Noord is great, they combine amazing upcoming talents with a very cosy club/bar, definitely my favourite spot besides De School. For clubbing I don’t go to any other venues to be honest, I would recommend everyone in Amsterdam to take a train (takes 40 minutes with the hi speed) to Rotterdam to check out BAR before they close (in June 2019). Just heard the news, and pretty sad about that.
For an authentic digging experience go to Red Lights Records, and if you are hardcore: Distortion Records. Besides this, Rush Hour and Bordello also are nice shops.
I don’t wanna think about De School closing, haha, I am already really scared about the last months…

I’m sure you’re aware that by the time you’ll be playing at Kablys in Vilnius, Mark Knekelhuis will be heating things up in another one just fifty metres away. How do you feel about that? Perhaps that’s a definite meet up after the shows with a bit of Lithuanian crowd?

Yes, we found out last week. Super nice! It’s actually funny because the Bestaan record was released on Mark’s label (Knekelhuis), and I’ll see him on Friday in Vilnius, and on Saturday I’ll play the same party as Interstellar Funk, who released my first record… Meeting both my recordlabel bosses abroad in 1 weekend, haha.
We didn’t really check the timetable (at least I didn’t) so still have to figure out if we can visit each others sets, but would be fun! I am very excited though for the party, last time in January was super fun!

Oh indeed it’s gonna be fun, Job. Dutch night in Vilnius is already this Friday, and even though the event’s name says it might be easy to get lost through the night, we really hope to do a double shot and visit both of the Amsterdammers Job Sifre at Labirintas 2018 and Mark Knekelhuis at Isla De Mona.